Top 10 Movies Salespeople Can Learn From 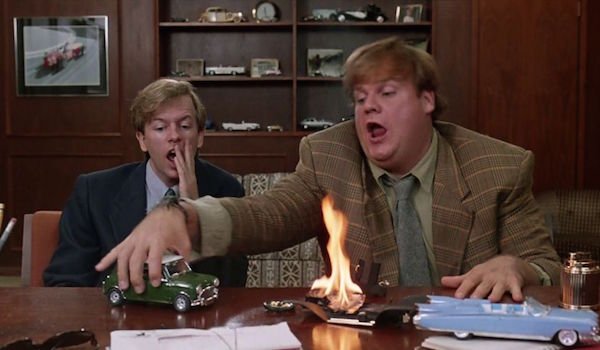 Top 10 Movies Salespeople Can Learn From

Without putting too fine a point on it, sales is pretty much a part of almost everything we do every day. Bottom line: If you had to buy it, someone had to sell it!

That being the case, it follows that sales or sales-related themes show up in the movies we watch from time to time whether we are aware of it or not.

Often, the people making the movies don’t get it 100% right because they’re movie makers not sales professionals. However, sometimes they do get it very right, even to the extent that salespeople can learn a trick or two from watching the film.

Here are the Top 10 movies that have gotten it right and provided ways sales professionals can improve their performance:

Award-winning actor Tom Cruise plays Jerry Maguire, a successful sports agent who suddenly questions his purpose in life. After being dismissed from his job for expressing altruistic views about the direction the industry should take, Jerry is forced to try and start his own agency. Getting this new venture off the ground hinges on Jerry’s ability to convince his star client Rod Tidwell (Cuba Gooding, Jr.) to stay with him. His campaign to keep Tidwell culminates in the famous “Show me the money!” scene which shows the lengths Maguire is willing to go to for his client. Ultimately, the movie shows the importance of going above and beyond to keep customers happy as well as the critical nature of landing that first big fish.

In this film, actor Michael Keaton stars as Ray Kroc, a milkshake machine salesman who transformed an average fast-food eatery owned by two brothers into the most iconic fast-food restaurant in history … McDonald’s. There is some controversy surrounding Kroc’s character in the movie, but when looking at it from a sales perspective, it’s plain to see he had a vision and was willing to go to great lengths to see it become a reality.

In this classic 80’s film, Robin Williams plays Tommy Wilhelm, a character in turmoil who is burdened by the loss of his job, financial instability, the separation of his wife, and his relationship with his father, among other things. Seize the Day shows the real-life struggles some salespeople face behind the scenes and how stress can adversely affect a salesperson’s performance.

Eddie Murphy and Dan Akroyd play two strangers who unwittingly become the subjects of a bet between two hard-hearted millionaire brothers. After having their lives turned upside-down by the brother’s social experiment, Murphy and Akroyd decide to get back at the film’s antagonists by running them out of business. While Trading Places is one of the few movies to provide an example of what short selling is, the film also highlights plenty of other selling skills used by the heroes as they plan and implement their revenge.

William H. Macy portrays real-life salesman Bill Porter, a door-to-door salesman with cerebral palsy. This inspirational is a story of perseverance through adversity, as Porter faces the many challenges of being a salesperson, but with additional factors that hinder his performance. It presents a motivational message on what it takes to succeed as a salesperson while shedding light on people with disabilities.

This movie features Henry Fonda starring as Mr. Davis or Juror Number 8. A teenage boy is accused of killing his father, but little in the way of context is provided in the courtroom. Instead of following the rest of the jury in quickly returning a guilty verdict, Davis requests more evidence be provided for consideration. Originally a play, this movie teaches important lessons about the power of persuasion as well as knowing more about your client before pitching to them.

Jesse Eisenberg and Andrew Garfield star in this movie about Facebook founder Mark Zuckerberg’s college years. While the film highlights the importance of protecting your idea from unscrupulous people who would steal it, it also teaches us what can be done with that idea if you have the right vision and drive. In a lesson for salespeople everywhere, Zuckerberg’s willingness to push beyond his own limits ultimately resulted in the creation of one of the profitable companies in history.

This movie tells the true story of a stockbroker named Jordan Belfort, played by Leonardo DiCaprio. Belfort was a successful broker who nevertheless ends up being laid off from the first investment banking firm he ever worked for. While he ultimately becomes wildly successful with his own firm, this movie expresses the dangers of becoming too focused on profits and making poor life decisions as a salesperson.

The film stars Giovanni Ribisi as Seth Davis, a college dropout who feels pressure to please his father. He lands himself a job as a trainee stockbroker and quickly becomes accustomed to the high income and glamorous lifestyle. However, when Davis realizes something shady is going on behind the scenes, he must choose between keeping his mouth shut to protect his way of life or be honest to protect those who are being taken advantage of. This movie teaches us that honesty should be prioritized over personal gain.

Saving the best to last, Tommy Boy is undoubtedly the greatest sales movie ever made! Starring Chris Farley and David Spade at their comedic peak, this film should be compulsory viewing for every rookie sales professional looking to make a splash in the industry. No more analysis necessary. Just go watch it!