From Prison to No. 1 in the World: The Shelley Winner Story 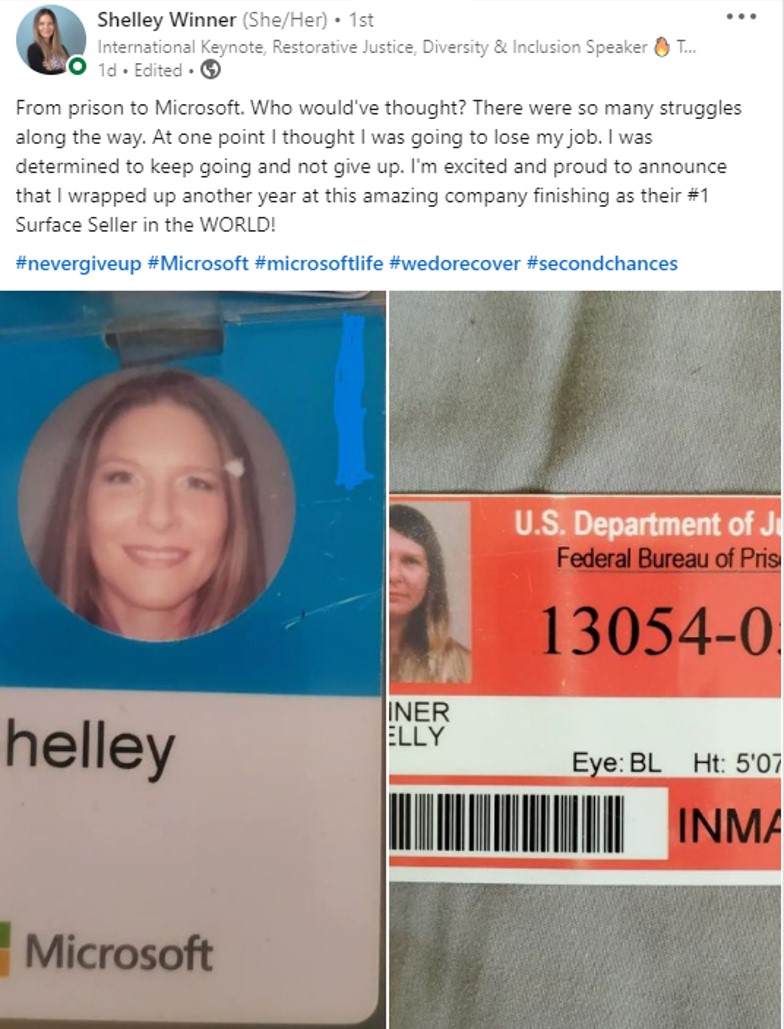 From Prison to No. 1 in the World: The Shelley Winner Story

If you’re already starting to modify or give up on the resolutions you made on New Year’s Eve, I’d like to share with you an incredible story of re-invention and success from a client who came to me in 2022 for individual coaching.

As a child of teen parents, whose father was addicted to and sold drugs, Shelley Winner would eventually struggle with addiction herself. Ultimately, she would be arrested for selling drugs and sentenced to four years in a federal prison.

Not long after her arrest, she discovered she was pregnant. Immediately, she knew she had to turn her life around if her child was to have any chance of avoiding the same fate. During her time in prison, Shelley used her time productively and upon her release, she was able to secure a job with none other than Microsoft.

However, as we all know from our own careers, landing a dream job like this is not always the happily ever after we see in fairy tales.

“Landing a job at Microsoft was always a dream of mine but when the company re-organized, I was pushed into a highly competitive B2B sales role,” Shelley said.

With little to no B2B experience, Shelley struggled to the point that she was sure she was going to lose her job. She knew she needed help if she was to make it through this latest challenge.

“I found Doug Dvorak of The Sales Coaching Institute and reached out for guidance. He met with me weekly and taught me so much about B2B selling. His training ultimately helped me win the Gold Club award for highest quota attainment,” Shelley added.

More than that, she also became Microsoft’s No. 1 Surface seller in the World!

In addition to meeting this challenge head-on and reaching new heights in her career, Shelley has also become a sought-after public speaker who travels the world espousing the benefits of hiring the formerly incarcerated.

By speaking at various TEDx events and other engagements, Shelley inspires and brings hope to others who are currently or formerly incarcerated or struggling with addiction.

So, before you give up on your plans to increase your sales this year by 25% (or to lose 25lbs), take a moment to think about where Shelley started and how far she has come.

It has been a high honor and privilege for me to get to know Shelley and be a small part of her journey to all of these well-deserved successes.

Truly a Winner by name as well as by nature!